What are the Origins of Just-In-Time Manufacturing?

Recent supply chain disruptions, exacerbated by the pandemic, may leave you wondering about the viability of just-in-time manufacturing. The model relies on a lean operation with limited inventory and has been the dominant manufacturing method for the past 50 years. But where does the technique come from and why has it remained so popular for so long?

Japan, despite being a relatively small nation, played a key role in the events of the Second World War. War in the Pacific Region between 1940 and 1945 was conducted by air, land and sea and proved a costly affair for all involved. Keeping up the war effort required a great deal of industrial output meaning that much of Japan’s economy was geared toward the production of military vehicles, aircraft and naval vessels. Industrial expansion was required to meet the demands of the war, which proved challenging for Japan as the country had finite resources and limited land available for manufacturing.

Defeat in 1945 saw the Gross Domestic Product (GDP) of Japan fall as low as 50.6% of what it had been in 1944 and drastically affected manufacturing output. In 1945, mining and manufacturing production 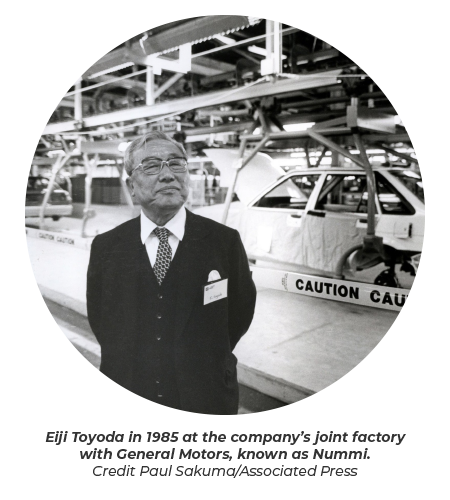 was between 20-30% of post war levels. The allied occupation and damage done to Japan’s infrastructure had left the nation in a compromised state. It would take until the early 1960s to reach pre-war GDP. For Japanese companies, the only way to recover from the effects of the war was to explore innovative manufacturing techniques. The four key challenges faced at the time were a lack of cashflow, available land, natural resources and an excess of labor.

Toyota, the automotive manufacturer, began to look at how to increase their production and remain competitive. The lack of cashflow and available land made the accumulation of large inventories a luxury Toyota could ill afford. With scarce land to store product and limited capital to acquire it, Toyota began to think in terms of lean inventory to counteract the problem. The story goes that during the 1950s Toyota’s CEO, Eiji Toyoda, was on a visit to Detroit to observe the manufacture of automobiles and noted that post-war USA had excessive quantities of inventory. In stark contrast to their Japanese counterparts the US factories seemed to be wasting a lot of material which was cheaply and abundantly available post-war. The US had no shortage of space to compile inventory and was enjoying the post-war boom. Consumers were ready to spend money after strict rationing during the war meaning that cashflow was less of a concern for US based manufacturers.

Following the trip, Eiji and Toyota began to formulate a method of manufacturing in stark contrast with their new US allies. Eiji was able to observe the conveyer fed lines of  Ford’s automotive manufacturing techniques which presented an excellent opportunity to increase their production efficiency. However, instead of stockpiling large quantities of inventory in space they didn’t have, Toyota began to retain smaller quantities in line with what they currently required for their orders. This method required a lot of forethought and planning as once the inventory was depleted it relied on a fast-paced supply chain to restock.

A second trip was made to the USA by Toyota in 1965 in which they observed a supermarket. Whilst in Japan the markets were smaller and served one customer at a time, US supermarkets kept their shelves stocked with thousands of items at all times. Stockers were employed to keep tabs on the shelves and replenish them as required. This system enabled the supermarket to keep track of their inventory in a way never before seen to the Toyota employees. Taking this back to Japan was the final key to the puzzle. Small quantities of each product could be kept and replenished as and when it was needed. An added benefit of buying small quantities of product meant that it was possible to implement strict quality control. If a batch was defective, it could quickly be identified before more was purchased.

The method proved very advantageous first to Toyota and then to other Japanese manufacturers who faced similar limitations. A combination of multiple factors, including just-in-time manufacturing and cheaply available fossil fuels, helped Japan’s GDP to rival that of Great Britain by the early 1970s.  It is fair to say this was truly the moment Japan’s economy bounced back from its post-war slump. Other nations soon adopted this and it enabled lean manufacturing on a global scale in order to compete with Japan’s formidable automotive manufacturers.

Post-war Japan helps us to understand the dominance of just-in-time manufacturing in today’s economy. A low-cost and low-waste manufacturing method is an easy sell especially when it has a proven track record by competitors. Just-in-time manufacturing is not without its risks however, if the supply chain is compromised and a supplier is unable to deliver, the manufacturer does not necessarily have the inventory to meet its customer orders. This can cause disruption to the supply chain as a result and any prolonged challenges, such as a global pandemic, can have major consequences.

Want to find out more about supply chain resilience and disaster proofing your operations? We have you covered. The combined Foam Expo and Adhesives & Bonding Expo conference will be addressing these topics in depth on June 28-30, 2022, in Novi, Michigan.

Register for your free pass to the conference here.